Chaos is a book written by Tom O’Neill. I first heard about this book on the Joe Rogan podcast. 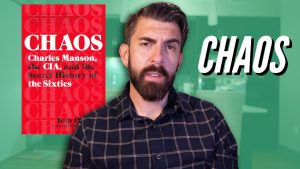 It’s not really self help, but we can definitely learn some things about self help and human condition form the book.

The book starts out with providing the murder scene at the house where Sharon Tate and Roman Polanski lived.

It then goes on to provide accounts of all the players in the investigation of the crime. He focuses a lot of time on the book Helter Skelter which was written by the prosecutor Vincent Bugliosi. Vincent Bugliosi basically ran with this narrative that Manson was trying to start a race riot based on some lyrics from a Beatles’ song.

However the Bugliosi himself says that he didn’t believe that Manson believed this himself.

Manson was mad at Terry Melcher. Therefore he killed the current tenants of the Melcher house to send a message.

Manson was part of a CIA mind control program that wanted to create mindless killing robots.

Manson was part of an FBI program to disrupt the hippie movement.

The murders were part of a drug deal gone bad. There was a lot of partying and drugs at the Tate house. A drug dealer was staying at the house at the time, so maybe the murders were part of that. A lot of the people in the house were tied to the mob as well. Maybe it was just an organized crime hit. The Manson family could have just been used to perform the hit. Maybe they were getting paid.

I love conspiracy theories and this book is filled with them. I am fascinated by these stories and so are many people. We want to get distracted by these things and wonder how people can do such things, but I think it just shows how people can do bad things if they let themselves do bad things. There are terrible people like Manson and other characters in this story throughout time.

I think the author tried to show how their was one single effort pushing all of the events in this book. What he ended up showing is that everyone’s lives are impacted by many things. We are impacted by our friends, families, society, our desires and our habits. There isn’t one single that pushes to become who we become but a large amalgamation of influences on our personalities. We are all connected and can have an impact on society. It’s important to have a positive influence on society even if it is a small positive influence. To think we can prevent all negative outcomes in society is not possible though and history shows us that.

Lessons to be learned from this book

You better have a plan for your life or someone else will. If you are just looking for someone or something to tell you what to do, then you might not like the outcome. Charles Manson was very convincing to a lot of people. There were a lot of liberal people back then that didn’t judge behavior apparently, and they ended up falling in with the wrong folks. Ultimately they were expected to commit crimes and kill people. Take control of your life and don’t leave it in other people’s hands.

People with bad parents have the odds stacked against them. Charles Manson came from a terrible background. His mom was a teenager when she had him, and she was an addict. This appears to have shaped his life. He was a criminal from early on. I’ve read a lot of books on the impact that parents have on their children. If you have a tough background, then you need to make sure to deal with that before it ruins your life.

Learn about psychology and hypnotherapy. It seems like hypnosis was used on a lot of characters in this story. The CIA mind control story was all about psychology and psychiatry. The CIA used LSD to help them reprogram people’s brains. It is believed that they destroyed a person’s sense of identity so that they were uninhibited when committing crimes. It is good to become familiar with these techniques so that you don’t have your mind controlled by someone else. Scott Adams has a lot of books about this.

Government needs strict oversight. We see it in today’s news, and we think it is a novel problem. It isn’t though. Power corrupts many people. We need stricter oversight around officials that we don’t elect. We see it with the CIA and FBI. They were involved in many corrupt activities and destroyed documents that would have allowed us to understand the corrupt acts that they committed. This also proves my other point that you need values for yourself. If not, you might end up committing corrupt acts that you didn’t intend. The CIA and FBI used college kids to carry out many of their studies. You can have an impact on the world just by directing yourself in a positive direction.

Try to limit the amount of big decisions you make on short term gains and big promises. It seems like the people that did the worst stuff in this story made decisions based on short sightedness. They wanted to feel good in the moment so they went along with a cult leader that promised them the world, or they did the bidding of a nefarious government agent. They did it for the glory of the moment. In retrospect, some of the people in the story did terrible things and it ruined their lives. Try not to make decisions only for the moment. Consider how it might impact the rest of your life.

Key Questions From The Book

Did Charles Manson consciously control his followers or was he part of a government plan?

Did the Family commit the murders? They were so loaded up on drugs it is hard to believe any of them. Could somebody else have committed these murders and blamed the family.

What role did the mob have in the murders?

Was Abigail Folger targeted since she was an heiress to a large fortune?

Was the family part of a government training program to learn more about LSD?

Did Terry Melcher know the murders were going to happen?

Did the beach boys know about other murders?

How many people did the family murder?

Was Bugliosi a puppet for the government?

Did the CIA kill Kennedy?

What is on the Tex Watson confession tapes?

Why won’t people in Hollywood talk about this time period?